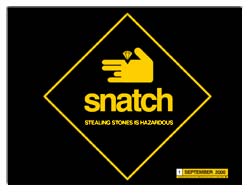 The American premiere of GUY RITCHIE's movie SNATCH has dazzled Hollywood by becoming one of the hottest events of the year (01).

Among the A-list stars set to appear at the glitzy premiere and after-party tonight (18JAN01) are Guy's pop star wife MADONNA, GWYNETH PALTROW, DUSTIN HOFFMAN, and FRIENDS actress JENNIFER ANISTON with husband BRAD PITT, who stars in the hit film.

It's also rumoured that the rest of the Friends cast - MATTHEW PERRY, MATT LeBLANC, COURTENEY COX-ARQUETTE and DAVID SCHWIMMER - will be there. They will be joined by Britpackers VINNIE JONES, JASON STRATHAM and film producer MATTHEW VAUGHN, who will all be guests of honour at the celebrity bash. Scores of extra security have been drafted in to cope with the thousands of fans expected to swarm to the event - which has proved so popular tickets have been specially coded to make sure they can't be duplicated illegally.

A source close to the movie says, "Guy really is the new toast of Hollywood. His films are well respected, and it doesn't do any harm being married to the world's most famous pop star either. "Commanding a guest list like this for your premiere is unheard of for a director who has made so few films. It's lining up to be one hell of a night." (RP/WNE/KW)