Matrix sequel to premiere at Cannes 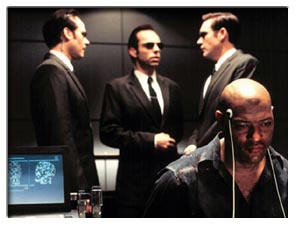 Matrix Reloaded, The (2003) is to receive its world premiere at this year's Cannes Film Festival.

The sequel to the Matrix will be shown out of competition on May 15 - the second day of the festival and the day the film is released worldwide.

It sees Keanu Reeves, Laurence Fishburne and Carrie-Anne Moss, with Jada Pinkett Smith as a newcomer to the cast.

The first and second Matrix films form two parts of a trilogy, with the final film to be released at the end of 2003.

The original action feature in 1999, loaded with special effects, was an award-winning global box office hit.

Organisers of the Cannes Film Festival are yet to release the full line-up of movies showing in and out of competition.

The film will also be shown out of competition at Cannes, where the top prize is the prestigious Palme d'Or.