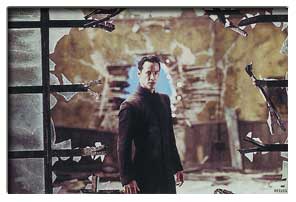 The Matrix Revolutions is to be released at exactly the same time in cities across the world next month, according to reports.
Industry newspaper Variety says this will mean a 6am start for fans in Los Angeles, 9am in New York, 2pm in London, 5pm in Moscow and 11pm in Tokyo on November 5.

It is the first time a film has been released in this way.

Distributors Warner Brothers say it is to capitalise on the final part of the trilogy's popularity and to ward off piracy.

The Matrix Revolutions is the final instalment of the successful sci-fi trilogy starring Keanu Reeves and Hugo Weaving.

The second film, The Matrix Reloaded, was a box office hit around the world despite some poor reviews and disappointment among some fans.

The Matrix Revolutions will open in 65 countries and will debut in Imax cinemas in the US on the same day as standard cinemas.

Imax Corporation, which owns the technology behind the format, struck a deal with Warner Bros to simultaneously show the film on 5 November.

It will be the first time a Hollywood blockbuster has been released in two formats at the same time for the different-sized screens.

Imax offers both 2D and Imax 3D images on curved screens up to 10 storeys high, using the latest film technology.

The Matrix Reloaded opened in Imax cinemas three weeks after its general release earlier this year.