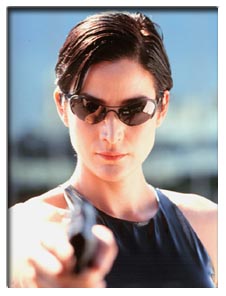 Matrix star Carrie-Anne Moss says had to overcome her fear of motorcycles for one of the main scenes in the new film.

Her character Trinity is involved in a high speed chase, in which she rides a motorbike into oncoming traffic, with no helmet.

The scene took seven weeks to film, using a specially-created mile-and-a-half loop set built at an army base.

Fans will see the elaborate stunt in Matrix Reloaded which opens in UK cinemas on Friday.

"I have a major fear of the motorbike - and it was very challenging for me to get on the bike every day and practice," Carrie says.

"I started off with a tiny bike every day and practice. Got on a little bigger bike. Mastered it. That went on for months, until I got up to the Ducati. My biggest fear about it was I guess, dying.

Carrie adds that she also had to hone her driving skills for a scene in which she pilots a car through a hail of bullets.

"I went to motion picture driving school twice," she says.

"I have a diploma and I framed it and put it on my wall. I really, really appreciated the skills that I learned there, because I was able to do some very cool stuff when it came to shoot."