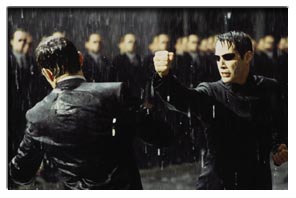 The final part of the Matrix trilogy has been released at the same time in major cities across the world on Wednesday.
The Matrix Revolutions hit screens at 1400 GMT in London - which equates to 0600 in Los Angeles, 0900 in New York, 1700 in Moscow and 2300 in Tokyo.

It will be shown simultaneously in 65 countries in a campaign never before attempted with the release of a movie.

Distributors Warner Brothers say they want to capitalise on the trilogy's popularity and deter potential pirates.

Keanu Reeves and Jada Pinkett Smith, who star in the film, will be in Tokyo to mark its unveiling.

At Beijing's Oriental Plaza moviehouse, 600 filmgoers, including 200 journalists, watched the film showing simultaneously in the cinema's six viewing rooms, while scores of others were turned away.

"My friends wanted to see it so I came along," said a female moviegoer.

"It's being shown all over the world at the same time so we thought it would be fun to be a part of this," she said.

The final instalment of the sci-fi phenomenon could be poised to break box office records - although at this early stage it is receiving a lukewarm response from critics.

The second film, The Matrix Reloaded, was a hit around the world despite some poor reviews and disappointment among some fans.

The third movie will also make its debut in Imax cinemas in the US on the same day as standard cinemas.

Matrix Revolutions had its world première in Los Angeles on 27 October at the newly opened Walt Disney Concert Hall.

The films' stars also returned to Sydney - where the trilogy was shot - to attend another première at the city's Opera House.