Matrix Reloaded may not be considered for Oscars 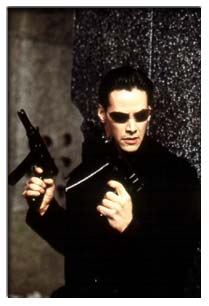 The makers of Matrix Reloaded, The (2003) may not enter it for next year's Oscars even though it broke worldwide box office records.

Warners are considering promoting only the third film, Matrix Revolutions, which is due out in November, for the Oscars, reports the BBC.

The company had considered pushing for both films to be nominated as a single entry, because they were shot on the same 240-day shoot, but the academy refused.

"Two separate releases with two separate marketing campaigns - even if they were four-walled together as one movie - would have to be considered two different films," said the academy's executive administrator Ric Robertson.

Warners then asked the academy if there was anything preventing them from offering only one of their films for consideration. The academy said it was within the rules.

There may also be two Kill Bill films this year because director Quentin Tarantino has split the movie into two, leaving its producers Miramax with the same dilemma.