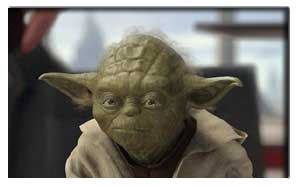 George Lucas has been presented with an award for his contribution to the development of special effects in the movie industry.

The Star Wars creator has been presented with Visual Effects Society Lifetime Achievement Award from director James Cameron at a ceremony at the Hollywood Palladium.

"If I have peers, this room is full of them," Lucas said to a crowd of nearly 700 attendees. "I am especially pleased to be here because this is a maturing process for the special effects industry. You're finding yourself in the industry, (you're) starting to congratulate yourself, and (you're) taking your place as an essential part of the cinematic process."

Lucas' lifetime achievement presentation was preceded by an array of short tribute films from fans and admirers including Steven Spielberg.

Spielberg noted that Lucas has inspired two generations of filmmakers since he began, including Lord of the Rings director Peter Jackson.

Drawing top honors in the competitive portion of the evening was Lord Of The Rings: Return Of The King (2003), which took home four golden Melies Moon Man trophies from a total of seven nominations.

Lord of the Rings won awards for models and miniatures, character animation for Gollum and performance by an actor (Sean Astin) in addition to best visual effects in a visual effects-driven motion picture.

Pirates of the Caribbean: The Curse of the Black Pearl (2003) won practical effects in service to a visual effects picture and outstanding matte painting, reports Hollywood Reporter