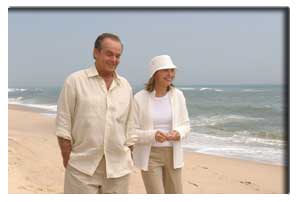 Jack Nicholson admits he can see some of himself in his new role as an older man with a penchant for younger women.

The 66-year-old actor was in London to promote Something's Gotta Give, the romantic comedy in which Nicholson stars alongside Diane Keaton and Keanu Reeves.

The film, which opens in the UK on Friday, sees the American play an ageing music industry executive who only dates younger women until he falls for Keaton, the mother of his latest young infatuation.

Nicholson, who has dated a string of younger beauties, including Men In Black II star Lara Flynn Boyle, said the film's director Nancy Meyers had written the script with him in mind.

He said: "Nancy wrote the script for me. I talked to her about it in advance while she was working on it.

"I guess it's got some good pieces of what my life has been like."

Asked if he felt he was getting old, the actor said his raving days were over and that he would be spending his time in London quietly.

"All my pals seem to be out of town. I'm just here for a couple of days so I won't be able to play Jack the Lad on this trip.

"All good things come to an end. I'm not much of a raver any more. I think it's unattractive."

Annie Hall star Keaton, 58, scooped a Golden Globe for Best Comedy Actress and has been nominated for a Best Actress Oscar for her part in the film, which has proved a hit in the US.

Nicholson's character Harry Sanborn begins to fall for Keaton after he suffers a heart attack while staying at the home of his latest infatuation Marin, played by Amanda Peet.