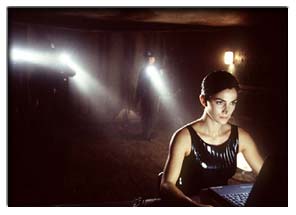 MATRIX, The (1999) star CARRIE-ANNE MOSS is sacrificing her entire social life to train for the movie's sequels currently being shot in Australia. The actress had to learn karate moves for the first movie but says the physical training then is nothing compared with the work she's having to do now.

She says, "They want more intense fighting, more complicated moves. I get up, train, eat dinner, go to bed and start over the next day. I've forgotten what a social life is like. "

Moss says the cast is still recovering from the horrific news of AALIYAH's death - the singer was to star in the two movies. She adds, "We were all devastated and shocked. She had already become part of the Matrix family. We still think about her. " (SVD/U/LE)