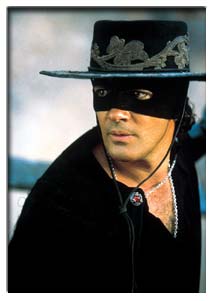 Antonio Banderas says he won't star in a sequel to Zorro.

He says he has been offered $20million to co-star with Catherine Zeta Jones in a sequel to the 1998 film.

Banderas says he would rather concentrate on "other things".

"I could have been rich," he tells Czech newspaper Mlada fronta Dnes. "It would have been $20million for each sequel. But I would prefer to concentrate on other things, theatre maybe."

Banderas also revealed a wish to direct a film starring his wife Melanie Griffith: "I'd love to direct my wife in a film. I know that very rarely does it work out when a husband directs his wife, but I like such challenges and maybe it would be successful."