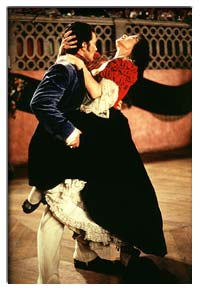 CATHERINE ZETA JONES and ANTONIO BANDERAS will swash their buckles in a new ZORRO movie. The dishy duo will reform for a sequel to 1998's sizzling swordplay romp, MASK OF ZORRO, The (1998).

Both stars will sign on the dotted line this week and will begin filming in six months time. Execs at Columbia Tri-Star are also trying to woo Zeta-Jones' hubby MICHAEL DOUGLAS into appearing in the production as the movie's bad guy.

Script writers are pencilling Douglas in as the villain, who sweeps Zeta-Jones' ELENA off her feet. A member of Columbia's development team, based in LOS ANGELES, said:

" We are confident Michael Douglas to the project Catherine and Antonio on screen were dynamite, but we're hoping that Michael will be take the film's sexual chemistries to a greater level. Catherine and Michael in a movie on screen together will be a winner with viewers. "

Catherine and Douglas starred together in OSCAR winning film TRAFFIC (2000), but never shared a scene. Screenplay writers are putting the finishing touches to the Zorro 2 script, ready for filming to start next year (02). (NB/WN/ES)