Woo Lined Up for Superman 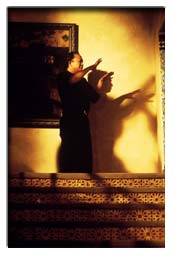 Reports are circulating that the Superman movies are to be reprised - with director JOHN WOO at the helm.

There's no word on who will play the man of steel, but BATMAN (1989) director TIM BURTON and LEAVING LAS VEGAS (1995) star NICOLAS CAGE have both been linked with the role in the past.

The last Superman movie was made in 1987, with the now crippled CHRISTOPHER REEVE playing the son of Krypton. (ACW/WNTST/PDD)