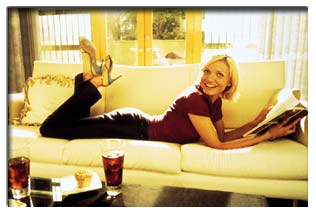 LATEST: CHARLIE'S ANGLES star CAMERON DIAZ is so busy she can't even attend the premiere of her new movie.

The THERE'S SOMETHING ABOUT MARY babe, who had to turn down a dinner with PRINCE CHARLES because of work commitments, is finding it hard to get away from the set of her new movie in Los Angeles - so she probably won't make it to the London premiere with fellow Angels DREW BARRYMORE and LUCY LIU.

A film company spokesman says, "She really wants to come but it depends whether she can swing the time off. "Her stylist is in London with her choice of outfits just in case she can jump a plane at the last minute." (NFA/WNTMI/PDD)

Film Stories : There's Something About Mary (1998)