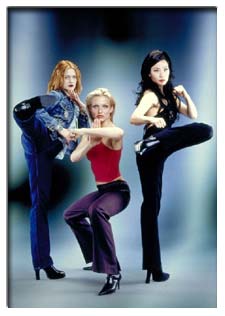 Work is already underway on a sequel to CHARLIE'S ANGELS (2000), with CAMERON DIAZ, LUCY LIU and DREW BARRYMORE all set to reprise their roles.

The trio of sexy stars are reported to be eager to sign up for the follow-up to last year's blockbuster action comedy.

McG, director of Charlies Angels, confirms a script is currently in progress. He says, "Charlies Angels 2 is actually being written now and we think it should be out by the summer of 2003. "

McGinty adds, "I've got a few tricks up my sleeve as to where we are going to go next time around. You'll still see some wire fighting, but there will be a lot more involvement with props and imaginative thinking and not just the hand to hand style. " (NB/WNWCEM/NFA)