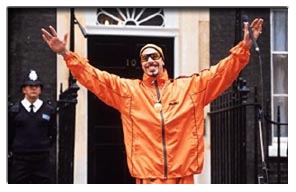 ALI G has landed a deal to star in a Steven Spielberg movie  as several complete idiots.

The comedy Dinner For Schmucks tells the story of a man who asks his friends to bring the most stupid people they can find to dinner.

Like Mike Myers in Austin Powers, the funnyman  real name Sacha Baron Cohen  will play a variety of characters, including the unluckiest and clumsiest man in the world.

Sacha was signed up when ET director Spielberg was in London this week. An insider said: Spielberg wants the movie to be a huge comedy like There's Something About Mary (1998).

He decided to sign Ali G up after watching him play characters like Borat and Bruno on his TV show.

Dinner For Schmucks is a remake of classic French film Le Diner De Cons and will start shooting in the US later this year for a 2004 release.

A springboard to Hollywood was what Sacha hoped for when his TV series Ali G In Da USA became a cult hit.

And he chose as his Tinseltown agent Jimmy Miller, who launched Jim Carrey’s career.

Spielberg is said to rate Sacha as a massive comedy talent with great timing.

He could now make it big where other Brit stars such as Mel B and Geri Halliwell have struggled.

Film Stories : There's Something About Mary (1998)