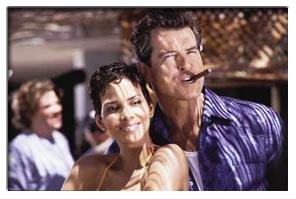 The soundtrack to the new James Bond film will be released at the beginning of November.

The album, to be called Die Another Day, will be released on November 11.

However, the film itself isn't released until November 20.

The soundtrack includes Madonna's Can't You See My Mind as well as a Paul Oakenfold remix of John Barry's Bond theme and an original score composed by David Arnold.