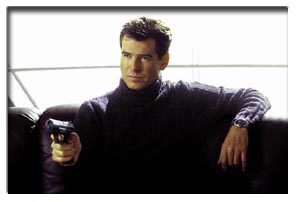 Pierce Brosnan is desperate to make a James Bond film with maverick movie-maker Quentin Tarantino. The Kill Bill auteur recently revealed his ambitions to make a Bond movie, and Brosnan - rumored to be stepping down as the superspy after making his fourth 007 film - thinks he'd be fantastic. When asked what Tarantino would add to the franchise, Brosnan gushes, "Life. A great sense of excitement and danger and the perspective of a film-maker who's really made people sit up and watch his movies. He's got a cutting edge which we got with the last Bond film Die Another Day with Lee Tamahori's sense of flair. They allowed him, more than any other director, to go out there with it. So someone like Quentin would be magnificent, whether it's me as Bond or some other guy."