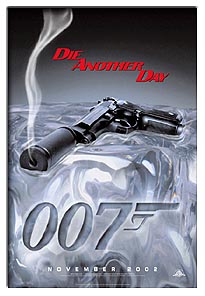 In a rare challenge to Hollywood, communist North Korea called on the US to stop screening Die Another Day (2002), saying the 20th James Bond movie slandered the isolated communist state and defamed the Korean people.

The MGM hit proved that the US was an "empire of evil" and "the headquarters that spread abnormality, degeneration, violence and . . . corrupt sex culture", North Korea's Committee for the Peaceful Reunification of the Fatherland said.

In the movie, Bond, allied with South Korean operatives, is sent to intercept an illegal arms deal about to take place between a South African diamond smuggler and evil North Korean officer, Colonel Moon, who's feared to be planning an invasion of South Korea and then Japan.

Die Another Day has irked some South Koreans as well, although it has not yet opened in Seoul theatres. Some young people are urging a boycott of the movie, calling it culturally ignorant and a slight to their nation's pride.

Meanwhile, the stand-off over North Korea's nuclear programs deteriorated further yesterday with a threat by the North to remove United Nations seals and surveillance cameras on its nuclear facilities by itself.