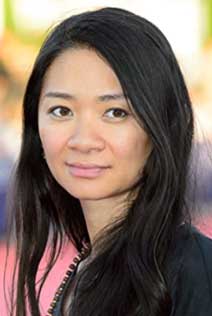 Nomadland's Chloe Zhao made history as the first woman of colour and second woman to win best director.

Chloé Zhao on Sunday night took home the Academy Award for best director for "Nomadland", a sweeping drama about a widow in her 60s (Frances McDormand) who travels the Western United States in a van after losing her job in the Great Recession. The film received six nominations in total, including best picture and actress for McDormand.

"I have been thinking a lot lately of how I keep going when things get hard," she said. "And I think it goes back to something I learned when I was a kid. When I was growing up in China, my dad and I used to play this game. We would memorize classic Chinese poems and texts, and we would recite it together and try to finish each other’s sentences."

Sir Anthony Hopkins won best actor for his masterful performance as a man suffering with dementia in The Father, 29 years after he won his first Oscar for The Silence of the Lambs.

His victory was the biggest surprise of the night. The award had been tipped to go to the late Chadwick Boseman, who died at the age of 43 last August, for Ma Rainey's Black Bottom.

She won best original screenplay for Promising Young Woman, which she also directed.

Frances McDormand, who took home the Best Actress Oscar, became the third woman (after Barbra Streisand and Oprah Winfrey) and the twentieth person to have both an acting and a Best Picture nomination, not necessarily for the same film. This is her third win and makes her a member of an elite club that includes Meryl Streep, Daniel Day Lewis and Jack Nicholson as the winners of three acting Oscars.