Best in Show Best In Comedy 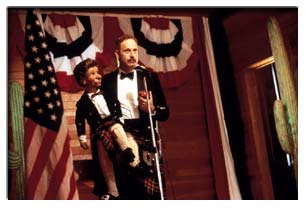 BEST IN SHOW (2000) lived up to its name last night (22APR01) when it swept the board at the 15th annual AMERICAN COMEDY AWARDS.

CHRISTOPHER GUEST, who is married to actress JAMIE LEE CURTIS, wrote and starred in the mockumentary about competitive dog shows, which carried off three trophies including funniest motion picture.