Witherspoon To Cash In On 'Blonde Sequel 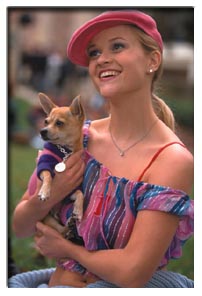 The studio responsible for Legally Blonde (2001) has set a start date of November for the follow up to last years hit comedy which will be called 'Legally Blonde 2: Red, White & Blonde'.

The star of the film Reese Witherspoon is set to do quite nicely out of it in the way of a $15 million pay cheque. Reese will also be on the other side of the camera for the sequel by trying her hand at producing alongside an as yet unconfirmed director.

Resse married fellow actor Ryan Phillippe after first meeting him at her 21st birthday party in 1997, a couple of years later they had a daughter, Ava, now 2 years old.

Reese has a new film out in the US at the end of the month called Sweet Home Alabama (2002) in which she plays Melanie, originating from a young white trash background but leaving her husband in Alabama and reinventing herself as a New York socialite.