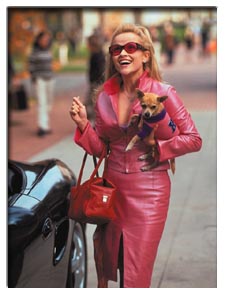 LEGALLY BLONDE (2001) is to follow BUFFY THE VAMPIRE SLAYER (1992) from the big screen to the small screen. The movie, starring REESE WITHERSPOON, was a box office smash in America and will open in Britain on 26 October(01).

The film, which centres on a ditzy college girl who goes to Harvard Law School, will be made into a series by American TV channel UPN. The network has already made a success of Buffy, which it bought from rival WB, as well as the small screen version of CLUELESS (1995). Witherspoon will not reprise her role in the new version. (BRC/WNWCAN/IG)