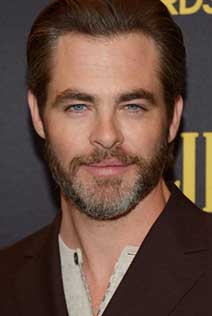 Chris Pine & Thandie Newton To Star As Ex-Lovers & Spies In Amazon’s Thriller 'All The Old Knives'.

"All the Old Knives" is based on the acclaimed novel of the same name by Olen Steinhauer, who adapted the screenplay for the big screen. Janus Metz will direct.

The story is set in the town of Carmel-by-the-Sea and follows ex-lovers - one a CIA spy, one an ex-spy - meet over dinner to reminisce on their time together at Vienna station. The conversation moves inevitably to the disastrous hijacking of Royal Jordanian Flight 127, which ended in the deaths of all on board. That failure haunts the CIA to this day, and Henry has come to Carmel to close the book on that seedy chapter. As they parry, flirting, over California cuisine, it becomes clear that one of them is not going to survive the meal.

Chris Pine is set to star in Olivia Wilde's new thriller, "Don't Worry Darling". He's also signed on to headline a reboot of "The Saint". There's also a new biopic about Walter Cronkite, "Newsflash", as well as yet another film, "Violence of Action".

Newton is also really busy currently, with a starring role in HBO's hit series, "Westworld". She also recently appeared in films such as "The Death and Life of John F. Donovan" and Lucasfilm's "Solo: A Star Wars Story". Newton will next appear in the upcoming sci-fi film, "Reminiscence", where she'll star opposite Hugh Jackman and Rebecca Ferguson.