Thandie Opts For Nappies Instead Of Fame 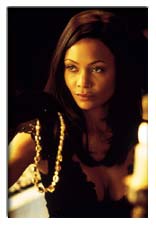 MISSION:IMPOSSIBLE 2 babe THANDIE NEWTON has sacrificed fame and fortune to have a baby - and she doesn't regret it for a second.

After her huge success opposite TOM CRUISE in the smash hit, 28- year-old Newton could have become a major Hollywood player - but decided she'd rather stay home and play happy families. "I figured that the movie would put me out there in a really big way and work in place of me while I have my baby; then I could come back and carry on", she says hopefully.

But admitting that audiences have short memories, she continues, "It was about opening up the perspective to involve family; what it means to be a woman and one half of a partnership. Making a million dollars isn't what's important to me right now."