Venom 2 Reveals Its Violent New Title as the Film Is Pushed Back to Summer 2021. 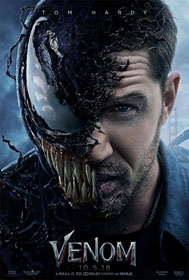 Sony's "Venom" sequel - officially titled "Venom: Let There Be Carnage" - has delayed its big screen debut. The film was expected to hit theaters Oct. 2, 2020, and will instead launch eight months later on June 25, 2021.

2018 release Venom was a surprise smash at the box office, earning $856.1m worldwide, of which $642.6m came from international markets.

On Monday Warner Bros revealed further scheduling tweaks, pushing The Batman deeper into 2021, and dating the Hugh Jackman sci-fi Reminiscence, a project that FilmNation and Endeavor Content introduced the package to buyers at the EFM in 2019, for April 16, 2021.

Across Hollywood, studios are adjusting their release calendars as cinemas remain closed due to the coronavirus pandemic. The global health crisis has also caused almost every film to pause production, meaning some company’s tentpoles might have not been completed in time for their original debut.