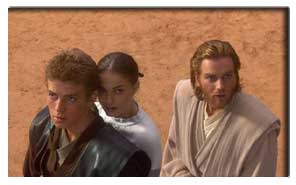 But for the teams of editors and special effects technicians, work on the movie has just begun, says Empire.

Lucas has announced that the third, as yet untitled, episode will be the darkest movie in the series and the last he will make.

Fans won't get to see the film, which tells of Anakin Skywalker's transformation into the evil Darth Vader, until 2005.