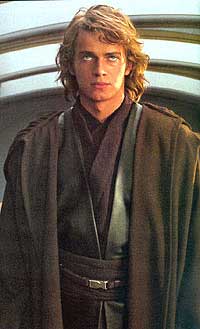 Here is the man who will become Darth Vader in the final instalment of the Star Wars film series.

And, as this first picture shows, director Lucas has his designers on track to neatly jigsaw 2003's Jedi Knight with 1977's evil leader of the Death Star.

The new, as yet untitled film, due for release in 2005, is actually Episode III in Lucas's series, which began in 1977 with Star Wars: Episode IV - A New Hope.

Hence, Anakin Skywalker's mane is showing a decidedly '70s style. There's no sign of a repeat of Princess Leia's coffee scroll hair-do yet.

The last film in the series finished its principal photography at Sydney's Fox Studios at 5.30pm yesterday.

With only some minor filming due overseas in March, Lucas and his team now have 18 months of post-production ahead of them.

Anakin was introduced in 1999's The Phantom Menace and was played by Jake Lloyd. Hayden Christensen took on the role in last year's Episode II - Attack of the Clones.

In the final episode, Christensen's character not only promises to turn nasty but will sire twin siblings Luke and Leia with Padme Amidala, played by Natalie Portman.

A comparison of the new Anakin with Luke, played in 1977 by Mark Hamill, shows the prescient casting of Christensen ensured a very believable father and son would work across three decades.

Australians added to the cast for the final Star Wars episode are Graeme Blundell and Claudia Karvan, who were cut from the last film, Bruce Spence and Rebecca Jackson Mendoza.