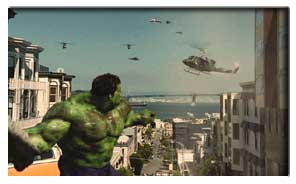 The highly anticipated US release of Hulk, The (2003)  starring Eric Bana  has been dealt a crushing blow with a rough cut of the film being circulated on the internet.
Universal Pictures is hugely miffed because the bootlegged version is unfinished product which doesn't do justice to the film's big budget computer graphics.

And it is the film's special effects that website critics have zeroed in on, suggesting some damage has been done in building the pre-release hype.

The biggest thorn in Universal's side is the popular website, Ain't It Cool, which has in the past run bootlegged films  including Spider-Man (2002) and Matrix Reloaded, The (2003)  before they hit the cinemas.

In the last week, Ain't It Cool has run several reviews by geeks picking holes in The Hulk.

"I saw an early workprint of The Hulk movie online and the Hulk hadn't even been added the scenes yet, let me tell ya, the CGI was terrible!" one critic said.

Not that all the website feedback has been negative.

"Forget all those cynics that doubt the movie's F/X," said one anonymous critic claiming to have seen the final product.

"Everything in this movie looks incredible. The integration of the CG Hulk into the real environments is flawless. When you see Hulk smashing things like crazy and tossing tanks around, you believe he's there doing it for real."

Universal is mounting an investigation into the origin of the bootlegged version.