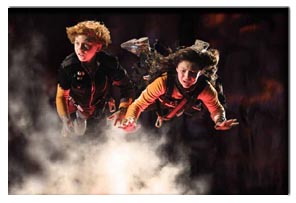 The successful Spy Kids series is soon to be facing inevitable changes as the stars get older. The makers want to shoot a third film before it's too late, following the first popular Spy Kids (2001) and the expected success of follow up film, Spy Kids 2: The Island of Lost Dreams (2002), soon to be released.

The young stars, Alexa Vega and Daryl Sabara are nearly 14 and 10 and according to director Robert Rodriguez just have time to do one more Spy Kids, he hinted that it may continue as a cartoon series after that.

Alexa who plays Carmen Cortez said, "I think if we keep on going, we'll be too old. I was 10 and I think all the other girls auditioning were eight. They didn't want it to turn into Spy Teens, which it's kind of doing, so that's why we just tried to blow one movie out of the way and do the next one and the other one coming up."