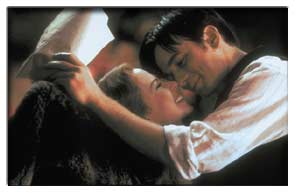 NICOLE KIDMAN and EWAN MCGREGOR deny an affair - but they looked close as they dined together at a London restaurant. Ewan, 30, kissed his fellow MOULIN ROUGE (2001) star on the cheek as they left the VONG eaterie in London's Knightsbridge.

TOM CRUISE filed for divorce from the Australian actress in February (01) but married Ewan denies he had anything to do with it. Nicole has been linked with FABRIZIO LOMBARDO, but he was nowhere to be seen as the actor pals enjoyed their meal. (BRC/WNTSP/ES)