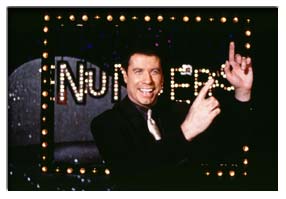 The JOHN TRAVOLTA-led thriller opened on Friday (09JUN01) around the United States and has shot straight to the top position.

Offering a heavy artillery of high-tech action and sex appeal including topless shots of actress HALLE BERRY, Swordfish reeled in about $18. 4 million (£13 million) for the Friday-to-Sunday period.