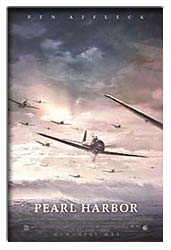 Second world war epic PEARL HARBOR (2001) has become the biggest film of the year making more than $430 million (£330. 7 million) worldwide. More than $230 million (£176. 9 million) of the profits from the BEN AFFLECK starring movie have come from outside America. DICK COOK, chairman of the WALT DISNEY MOTION PICTURES GROUP, which produced the film, says,

"Audiences around the world have clearly responded to Pearl Harbor (2001) and have made it a hit motion picture. Its North American gross is a great accomplishment by any measure, and we couldn't be more pleased that this film was equally able to reach international audiences in such huge numbers. " (RP/WNWCAN/ES)