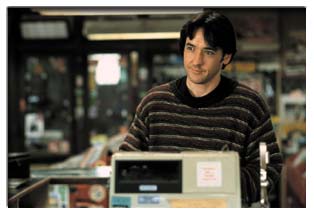 JOHN CUSACK is being tipped to portray the late JOHN F KENNEDY JR in a biopic about the son of the assassinated American president.

WARNER BROS is preparing a new script focusing on the private life of the 38-year-old playboy publisher, whose plane crashed into the Atlantic two years ago (JUL99). His wife CAROLYN BESSETTE KENNEDY, 33, and her sister LAUREN GAIL BESSETTE, 34, also died in the tragedy while the trio were en route to a wedding in Cape Cod.

Cusack is said by friends to be keen to portray Kennedy Jr. There was talk of GEORGE CLOONEY playing him in another biopic called LIKE FATHER, LIKE SON but he has withdrawn from that project.

A film source says, "Cusack believes there is a lot of scope in the subject matter so long as it isn't just about sensationalising the Kennedy clan. "He has no interest in that or just playing a cardboard cutout who drops in and out of bed with a string of women." CAMERON DIAZ and CHARLIZE THERON are front runners to play Kennedy Jr's wife. (NFA/WNWCAN/PDD)