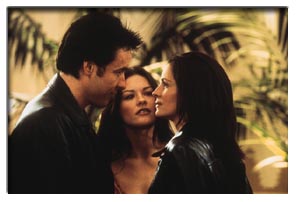 The HIGH FIDELITY (2000) star lip-locked with the newly-single actress on screen and jokes he found it a horrible experience. He says,

"She bites, literally. I mean we're talking about plastic surgery. I don't know what it is. Usually when I do love scenes with women, I reward them with bountiful gifts of meat, and all these different things. But, she just grabbed that lip and just ripped it right off! And that was the last day of shooting. We couldn't shoot anything more."

However the actor was keen to reiterate he was only joking, he quickly added, "She's a fine kisser. " (ES/WNWCETO/IG)