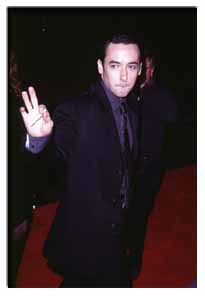 Hollywood hunk JOHN CUSACK spent his time between takes for AMERICA'S SWEETHEARTS (2001) - gambling. The heart-throb admits things didn't get boring while he was waiting for his scenes on the set of the movie because they were shooting in Nevada, where betting is legal.

And his fun times certainly paid off when he won $20,000 (£16,000) on the dice. He says, "I would consider myself a pretty good gambler but I only play dice. On this particular film my driver and I would gamble on the crabs table. We won $20,000 one night and they gave us the dice."(MB/WNV/ES)