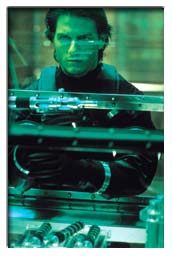 Joe Carnahan has dropped out of directing Mission: Impossible 3 due to creative differences.

According to The Hollywood Reporter the Tom Cruise film remains scheduled to begin shooting as planned next month in Berlin.

In "M-I:3," Cruise is set to reprise his role as secret agent Ethan Hunt, with Scarlett Johansson, Carrie-Anne Moss, Kenneth Branagh and Ving Rhames rounding out the cast. The 1996 original was directed by Brian De Palma, and the 2000 sequel by John Woo.

The news comes shortly after Paramount announced it was shifting the release date of the film by seven weeks, moving it from its original slot in the first week of May to June 29, 2005.