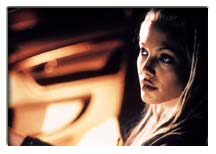 KEVIN COSTNER's upcoming film BEYOND BORDERS is suddenly "up in the air" because co-star ANGELINA JOLIE has refused to play love scenes with the 45-year-old hunk.

Jolie, 25, claims Costner is far too old to romance on screen -even though his real-life girlfriend is 25-year-old model CHRISTINA BAUMGARTEN.

A source says, "Jolie is flatly refusing to play love scenes with Costner because she reckons he's old enough to be her dad." Jolie's husband in real life however is 45-year-old BILLY BOB THORNTON. (MB/NE/CPT)