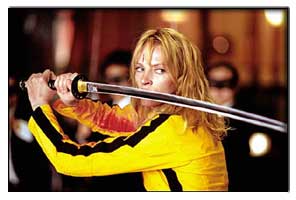 Instead of releasing what would be roughly a three-hour film, distributor Miramax is splitting Kill Bill into two parts of about 90 minutes each.

Part one will debut in the US on October 10, the original release date scheduled for the film.

A date for the second instalment has yet to be determined, though it could come between two and six months later, Miramax co-founder Harvey Weinstein told the New York Times.

The move allows writer-director Tarantino to screen his full story before audiences and avoid potential cuts to get it down to a more viewer-friendly length.

Miramax has feuded with directors in the past on film edits, including Martin Scorsese on Gangs of New York and Billy Bob Thornton on All the Pretty Horses.

Kill Bill, Tarantino's first film since 1997's Jackie Brown, stars Uma Thurman as an assassin out for revenge against a hit man who tried to kill her.