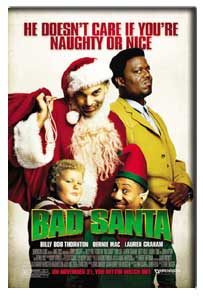 Billy Bob Thornton says the controversy over his Bad Santa (2003) movie wouldn't have happened if it had been made in Europe.

The film has reportedly outraged Disney executives because it features Thornton as a sex-crazed, foul-mouthed Father Christmas who tells kids he doesn't exist.

But the actor hit back: "They don't know what they're talking about. It's ridiculous. This is a comedy with a few swear words. So what?

"Nobody would pay attention to this in Europe. If this is already controversial, they should stop making movies where people get shot."

Bad Santa has been made by Disney subsidiary Miramax which was also behind Quentin Tarantinio's Kill Bill.