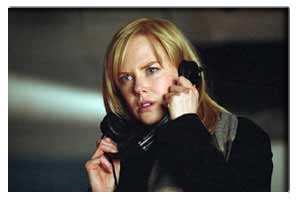 Nicole Kidman thrilled fans as she attended the UK premiere of her latest film The Interpreter.

She plays Silvia Broome, an interpreter at the United Nations headquarters in New York.

Director, Sydney Pollack, also attended the screening but co-star Sean Penn couldn't attend due to filming commitments in the US.

Nicole's date for the screening was a friend who she lived next door to as a child.

Speaking at the premiere, Pollack said: "This is the first time I have the pleasure of working with Nicole. It was like being given a great gift."

The drama follows an interpreter who overhears a plan to assassinate an African leader during his address to the General Assembly.

The film is released in cinemas today.