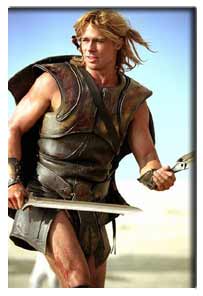 Ashton says he went with girlfriend Demi Moore to see the Greek epic, but was not happy when he noticed how much admiration she had for Pitt's body reports Contactmusic.com.

"And Demi and her friend are making audible noises every time like, 'Ooh! Ahh!' And I'm like, 'Baby, I'm right here!'

"So I went out and hired Brad Pitt's trainer."