Arnie's back in London for Terminator premiere 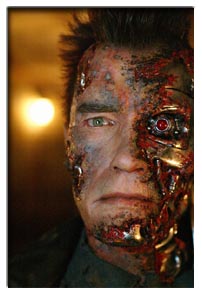 Arnold Schwarzenegger rewarded British fans with a ten minute walkabout ahead of the UK premiere of the third Terminator movie.
The 55-year-old star is back in the role of the killer cyborg in Terminator 3: Rise Of The Machines.

The former Mr Universe, dressed in a black suit and his trademark steel-toed cowboy boots, lingered among 5,000 fans outside the Odeon Leicester Square, accompanied by his wife Maria Shriver.

"It's such a great crowd here - it's terrific to see such enthusiasm here," Schwarzenegger said.

He was joined on the red carpet by the film's female stars, Kristanna Loken and Claire Danes.

Schwarzenegger appears nude in the movie and worked hard to get back in shape for the scene.

He said: "It's always embarrassing to do a nude scene but the important thing for me was to get back in the shape I was in for Terminator 1 and 2.

"I did three hours of training every day and I had to stay away from the junk food. It was as if I was training for another Mr Universe competition."

The Austrian-born star, who is tipped to be planning to run for governor of California, said he would be back for yet another run as the Terminator if this movie proved a hit with audiences.

With a budget of £110 million it is the most expensive independently financed film of all time and topped the US Box Office on its release.