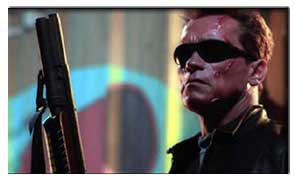 Arnold Schwarzenegger stepped into the role of governor-elect in California yesterday, offering few new plans other than confirmation he will terminate his acting career for the new job.
A day after a landslide victory, Mr Schwarzenegger fronted a lengthy press conference that was in contrast to his two-month campaign in which he avoided close scrutiny over his policy platform.

But he did little more than renew pledges for an audit of the state's crippling $US38 billion ($56 billion) budget deficit and to repeal several new and unpopular laws.

Before a packed hotel room in Los Angeles, the former Mr Universe bodybuilder, action hero and now leader of the most populous US state vowed to work "day and night" and, at least temporarily, turn his back on Hollywood.

Mr Schwarzenegger, who aides says will opt for a low-key swearing-in ceremony next month, had been fuzzy on what he would do with his acting career if elected.

"There will be no time for movies or anything else," he said.

"The bottom line is we have to open up the books and find out what the waste is."

Mr Schwarzenegger is also facing problems with his own aides questioning the newcomer's legal ability to meet promises to repeal a recent car tax hike and extension of driving licences to illegal immigrants.

"We are exploring whether he can do it himself, get the help of the Democrats or take it to a vote," one aide said. Political experts viewed the two issues as the final nails in the coffin of incumbent Gray Davis, who on Wednesday became only the second US governor, and the first since 1921, to be ousted mid-term.

Mr Schwarzenegger yesterday also dodged questions about whether he would move from the LA mansion he shares with wife Maria Shriver and their four children, to the state capital of Sacramento.

On election night, he thanked his wife for delivering "many votes" with her defence of him in the face of mounting allegations he had sexually harassed women for 30 years. The close of counting revealed the sex allegations, and his opposition to the licence issue for illegal immigrants, had little affect among the powerful female and Latino voters.

The possibility of Mr Schwarzenegger running for America's top job was raised yesterday with the the US Congress considering moves to amend a constitutional native-born requisite for presidents. The US Constitution says the president and vice-president must be US-born and have resided on American territory for at least 14 years prior to taking office.

That law would bar Mr Schwarzenegger, who was born in Austria.

But legislation before both houses of Congress would allow a naturalised American to assume the highest US office.