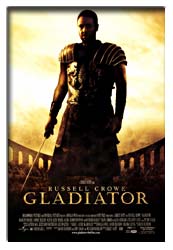 A sequel to the hit movie Gladiator is in the pipeline, according to reports. The sequel would be set 15 years after the original film left off.

But there is no indication of who would star in it.
The first film, which saw Russell Crowe star as a Roman soldier who died a hero, won five Oscars and was one of the most successful films of 2000.

Screenwriter John Logan, who worked on the first film and has also written for The Time Machine and Any Given Sunday, has signed up for the sequel, said the paper.
Another of the original writing team, David Franzoni, has been lined up to produce the sequel, it added.

The original screenwriting team were given an Oscar nomination in 2001.

Producer Doug Wick, who worked on Stuart Little and Girl, Interrupted, and Walter Parkes, who produced Men in Black and Minority Report, are also lined up to work on Gladiator 2.

Russell Crowe is not expected to return after his character, General Maximus Decimus Meridius, was killed at the end of the film.
He won the best actor Oscar for the role.

Many of the other main characters also ended up dead, including Emperor Commodus, played by Joaquin Phoenix.
Gladiator's director, Ridley Scott, is also not expected to return to take charge of Gladiator 2.

The sequel is not likely to hit screens until 2005 at the earliest.