Gladiator 2 On The Way 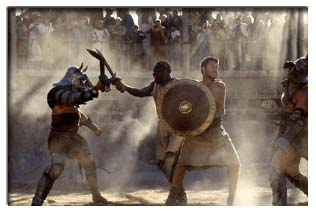 After the global success of Gladiator (2000), Dreamworks is keen to give the go-ahead to a follow up movie. The Best Picture Oscar winning film directed by Ridley Scott and written by John Logan earned more than $450 million worldwide and received nine Academy Awards.

Rumours suggest that the second Gladiator film may focus on the early years of the reign of Marcus Aurelius and the gladiatorial days of Antonius Proximo. These were the roles that were originally played by the late Richard Harris and Oliver Reed.

Logan says, "It's in the story phase. I'm meeting with Ridley and talking about what it should be and sort of flushing it out. It's early days, trying to pick out a story. It does have something to do with the first one and I'm not calling it a sequel. It's going to be very exciting."