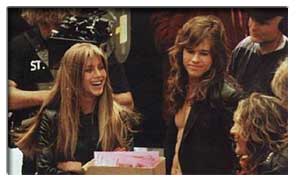 Hollywood star JENNIFER ANISTON may be starring in new movie ROCK STAR - but she insists she a musical flop. The FRIENDS actress, married to actor BRAD PITT, admits to experimenting with music and failing miserably.

She says, "I'm telling you I have no musical talent at all. " To those who need proof of her lack of musical ability, Season two of the hit comedy, showed Aniston as RACHEL GREEN dressed in a bridesmaid dress singing COPACABANA out of tune at a wedding back in 1996.

The stunning blonde refuses to sing karaoke, explaining, "I have stage fright. Unless the song is written for me and I know I can do it, I will be petrified on stage. " (ES/WNWCC)