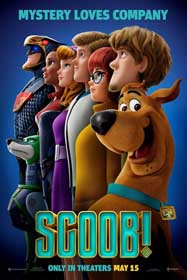 Warner Bros "Scoob", an animated film based on "Scooby-Doo" characters, will skip its planned theatrical release and instead launch next month on digital rental services.

Warner Bros. announced on Tuesday that it will release the family animated film "Scoob!" for digital ownership and premium video-on-demand on May 15, making it the second film initially planned for theatrical release to jump straight to home release thanks to the coronavirus pandemic.

The move comes two weeks after the release of Universal/DreamWorks Animation's "Trolls World Tour", which was initially set for release in theaters on April 10 but was moved to VOD after theaters worldwide began closing because of the pandemic. While no specific numbers on digital rentals have been reported, "Trolls World Tour" has ranked as the top-selling film on multiple digital rental services, including Google Play and FandangoNOW. Disney has also announced that its adaptation of the young adult novel "Artemis Fowl" will be pulled from theaters for exclusive streaming on Disney+.