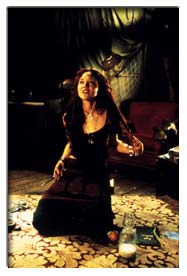 A sexed-up sequel to THE BLAIR WITCH PROJECT is set to add spice to the shivers.

BOOK OF SHADOWS: BLAIR WITCH 2 aims to achieve the cult status of the original with an additional bonus in the form of bewitching ERICA LEERHSEN. The 24-year-old was magicked away from working the comedy circuit in New York clubs to play the sexiest witch ever. Leerhsen enthuses, "Horror movies give women a chance to be sexy, complicated and real - something almost rejected in Hollywood."

The sex injection is part of a redirection in style, with a much glossier, gorier format - and a much bigger budget of £12 million ($18 million), as opposed to a mere £22,000 ($33,000) for the first film. The sequel follows a group of obsessed Blair Witch Project fans as they retread the original victims footsteps, and opens in Britain on 27 October(00). (KW/WNTST/PDD)

The makers of the BLAIR WITCH sequel BOOK OF SHADOWS are launching a new Internet marketing campaign for just three days -in a bid to increase interest in their Halloween movie.