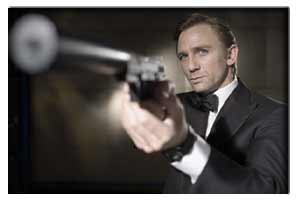 Movies bosses are running out of time to find a Bond girl for the new 007 movie.

But apart from Craig and Judi Dench, who will reprise her role as M, most of the cast has still not been signed up.

Director Martin Campbell's priority will be finding a female lead.

Four actresses are said to be reading for the part this week in London with Craig. The hope is that a decision will be reached by next week.

The trade says that names being bandied about are Species beauty Natasha Henstridge and Australian actress Kimberly Davies.

Charlize Theron and Angelina Jolie have also been said to be in the running.