Pregnant Julia to take a break 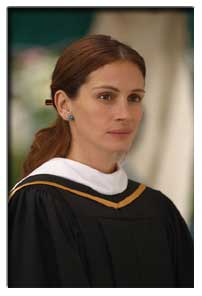 Julia Roberts is to take a break from acting to concentrate on being a mother.

The actress, due to give birth to twins early next year, says she will not take any movie roles in the near future.

She told America's Newsweek magazine: "I'm not planning anything.

"I can't imagine how big I'm going to get in the next three months, but you just kind of play it as it comes, I'm allowed to do that, aren't I?"

The star, who married cameraman Danny Moder in July 2002, has two films, Ocean's Twelve and Closer, set for release later this year.

Earlier this week, it was revealed the 36-year-old twins will be a boy and a girl.